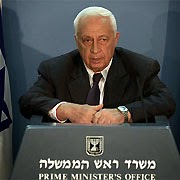 JERUSALEM — Israeli Prime Minister Ariel Sharon called Tuesday for a total cease-fire with the Palestinians in response to an international commission's report that outlined a plan for peace talks. "I call on our neighbors to stop the violence immediately and return to the negotiating table," Sharon said. "If there is a cease-fire, we will uphold it." However, Sharon refused to accept the Mitchell Commission's recommendation that Israel freeze construction in existing settlements.

A senior Palestinian official, Ahmed Abdel Rahman, dismissed the offer. "We reject everything Sharon said about a cease-fire," he said.

Sharon said he accepted the report of a team headed by former U.S. senator George Mitchell that was released Monday and endorsed by Washington.

Israeli Defense Minister Binyamin Ben-Eliezer ordered the Israeli army to stop all firing except "when life is in danger" and called on the Palestinians to "immediately stop violence and terrorism as a first step toward a return to the negotiating table."

Sharon said he accepted the formula of the Mitchell Commission: a cease-fire, followed by a cooling-off period, confidence-building measures and finally, peace talks. The commission also called for the Israelis to only use non-lethal force against Palestinians who attack outposts with rocks, and that the Palestinians must arrest the Hamas terrorists who are attacking Israelis.

The report also called for a freeze on construction at existing settlements that house 200,000 or more Israelis. Sharon said Israel would not expand the borders of any settlements. But he insisted that Israel has an obligation to permit new housing within existing settlements to accommodate the "natural growth" of the thousands of families living there. On Monday, Secretary of State Colin Powell called the settlement issue "a key element that has to be dealt with" but declined to call for a freeze.

Palestinian leaders say Israel's occupation of Palestinian land must end before they stop the unrest.

"It is the Israelis who are the terrorists — the Israeli occupation, the Israeli policies, expanding settlements, confiscation of land," Palestinian security chief Col. Jibril Rajoub said.