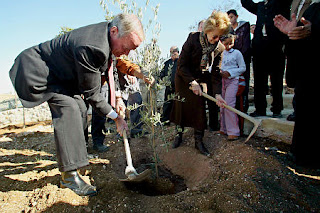 Dr. Scott Harrison and Sally Harrison of CURE International are watched by kids
as they plant olive tree at site of Bethlehem hospital

BY MATTHEW KALMAN
SPECIAL TO THE NEWS

BETHLEHEM - On the spot where the Gospel says an angel told the
shepherds that Christ was born, a new hospital is planned for the
neediest children.

A $16.5 million, state-of-the-art hospital funded by the Christian
charity CURE International will rise on an abandoned Israeli military
base, bringing together Christian, Muslim and Jewish doctors to treat
the kids.

"The Bethlehem hospital is unique in that it is bringing together
three faith groups to build a facility of healing in a very volatile
region," said CURE founder Dr. Scott Harrison at a groundbreaking
ceremony last week.

"Christians and Muslims will serve together at the hospital and will
receive additional training at some of the leading hospitals in
Jerusalem," he said.

The hospital, which will replace an army base in Shepherds' Field,
should be ready to open in two years.

It will be the 12th medical facility established by CURE, which has
treated more than 50,000 children around the world from Afghanistan to
Zambia. It also will be the first dedicated children's hospital in the
Palestinian territories. CURE will train local doctors in complex
surgery and treat up to 10,000 children every year.

"We've come to Bethlehem because we're aware of the enormous need that
children here have and the great difficulty they have in getting
medical care," said Harrison.

The new facility is a symbol of hope in a region where religious
differences have often resulted in warfare, and comes as the White
House tried to revive the Israeli-Palestinian peace process with
meetings in Annapolis, Md., and Paris.

"It is appropriate that after the Annapolis Accord and after the
meetings in Europe just a few days ago that we're bringing together
the Jewish community, the Arab community and the international
community," said Harrison. "We're working together now on a very
concrete example of what the international leaders have been trying to
do."

Salah Al Tamari, the governor of Bethlehem, said the new hospital will
unite Palestinians of all faiths.

"The CURE hospital will be well received by all people," said Al
Tamari. "In Bethlehem, we set the example for co-existence. Bethlehem
is not just a holy place. It is a message - a message of peace,
tolerance, freedom and acceptance of all people."
No comments:

Palestinian student trades rifle for amnesty and quest for peace

Rabiya Hamed, as a member of the Al-Aqsa Martyrs Brigade, was shot six times by Israeli commandos in an assassination attempt. Photo by David Blumenfeld, special to the Chronicle

Ramallah, West Bank -- Less than a year ago, Israeli soldiers pumped six bullets into Rabiya Hamed in a botched assassination attempt that left four others dead and more than 30 wounded.

Hamed has since signed a controversial amnesty pact with Israel along with 177 other members of Al-Aqsa Martyrs Brigades, the militant armed wing of Fatah, the political movement founded by the late Yasser Arafat. They agreed to surrender their weapons and renounce terrorism in exchange for Israel taking them off the most wanted list. All have been recruited back into the Palestinian security forces.

Even though other Al-Aqsa members continue to carry out attacks - the latest a November drive-by shooting that killed an Israeli man - the 178 former gunmen are keeping up with their end of the bargain, according to two Israeli security officials who spoke on condition of anonymity.

Today, Hamed is studying for an undergraduate degree in social work at the Arab Al-Quds University in Jerusalem and hoping to find a wife. He draws a salary from the Preventive Security forces - the largest security paramilitary security group loyal to Fatah - but spends most of his time studying.

Many Palestinians believe the amnesty is less about strengthening Israeli security than emboldening Fatah's ability to bolster its security forces against its chief political rival - the militant Islamic group Hamas. Fatah aims to prevent Hamas from strengthening its position in the West Bank after being ousted by Hamas from the Gaza Strip.

At 33, Hamed represents a generation of Palestinians reared on violence who hope that the recent peace conference in Annapolis, Md., will mark a fresh beginning in their dream to achieve independence.

"Maybe this time the talks will bring peace. I don't know. I hope so," Hamed said.

The day undercover Israeli commandos came to kill Hamed last January, he was studying for a midterm exam in social work. Hamed knew he was a marked man, singled out for assassination for his Al-Aqsa activities.

When the second Palestinian intifada erupted in September 2000, Hamed was a counterterrorism officer in the Palestinian Preventive Security forces. He soon joined Fatah gunmen, who became the Al-Aqsa Martyrs Brigades and secured a spot at the top of Israel's most-wanted list.

For the next few years, Hamed lived like a fugitive, hiding in the hills around this West Bank city. He slept in caves and abandoned buildings, seeing his family perhaps once a week. He lived for months in the Mukata, the Palestinian presidential compound in Ramallah, under the protection of Arafat, then Mahmoud Abbas, who became president of the Palestinian Authority after Arafat's death in 2004.

When the intifada petered out in 2005, Hamed remained on the run, hunted by Israel for crimes so serious that even he declines to talk about them. An Israeli army spokesman described Hamed as "a senior wanted terrorist who was involved in attacks against Israeli civilians and IDF (Israeli Defense Forces) soldiers."

"It's not wise for me to reveal security information that might be used by the Israelis," said Hamed, while chain-smoking and drinking thick black Arabic coffee at a Ramallah cafe.

Hamed's part-time course at Al-Quds University was the closest he came to living a normal life. That January afternoon, he had gone to the second floor of an office building near an open-air market in the center of town to use a friend's computer and prepare for exams.

About 3.30 p.m., the phone rang. It was a friend from the Martyrs Brigades, warning him that an undercover Israeli unit had entered Ramallah. The phone rang again, but when he answered there was no one there. Then a stranger appeared in the office doorway.

"He asked me where the toilet was but I sensed immediately that he was an Israeli soldier," said Hamed. "I walked out into the corridor to show him the way, and there were two more strangers out there. 'Are you guys also looking for the toilet?' " I asked.

"The next thing I knew, a few of my friends were flying up the stairs, looking for me. Within seconds, the Israelis had them on the floor, with guns pointing at their heads. Then they started shooting at me from point-blank range."

Hamed was hit six times. One bullet drilled a hole in his lung, narrowly missing his heart. Another whisked through his neck, an inch away from his spine. He was shot in the lower back, thigh and arm. The volley of bullets propelled him backward. He toppled over down two flights of stairs, and crashed down the steps to the street door.

"I got up and I ran," he recalled. "I just ran until I couldn't go any further. I must have run about 400 yards and then I just collapsed, right next to a taxi. That's the last thing I remember. Everything went blank. He (taxi driver) must have scooped me up and driven me to hospital. I was rushed into emergency surgery. It saved my life. The next thing I knew was when I woke up in hospital after the operation."

Back in the market, there was pandemonium. The three strangers were part of an elite undercover commando unit of the Israeli army. As Hamed plummeted down the staircase, dozens of Palestinian gunmen and youths came running toward the office building. Within seconds, a huge crowd had gathered.

The Israelis called for backup, which came in the form of Apache helicopters, a dozen jeeps filled with soldiers and a D-9 armored military bulldozer, which plowed through the market toward the trapped soldiers, crushing parked cars and destroying shops and stalls.

The crowd fought back, pinning the Israelis for two hours with a barrage of bricks, stones, bottles and small-arms fire. Four Palestinians were killed and 30 injured.

Hamed was eventually whisked back to the heavily guarded Mukata compound, where Abbas took him under his wing. He spent the next month and a half confined to a bed in a specially equipped room just a few yards from Abbas' office.

In July, Israel offered amnesty to wanted Fatah gunmen if they pledged to lay down their arms and renounce violence. In a ceremony at the presidential compound, Hamed handed over his M-16 rifle.

Accepting amnesty put Hamed and his 177 colleagues at odds with Hamas, who accused Fatah of giving up the resistance to the Israeli occupation. In a communique last month, Izzedine Qassam Brigades, the military wing of Hamas, said Fatah had turned their forces into "guards of the Zionist entity."

But such slights don't seem to faze Hamed.

"The fact that I have laid down my gun does not mean I have stopped fighting," Hamed said. "I continue my work, just not in the military. I continue through my work in the Palestinian security forces."

But Hamed still sleeps in the Mukata for his own protection.

"It's miserable sleeping in the Mukata. I'm 33 years old. I need to feel that I have my own home," he said. "I want to get married, have a family and live a normal life. Like every Palestinian, I'm waiting for peace and a better day."

This article appeared on page A - 21 of the San Francisco Chronicle
No comments: