Holidaymakers were warned to be vigilant after a Palestinian suicide bomber killed three people in the Israeli resort of Eilat yesterday.

It was the first such attack in the Red Sea port in the far south of the country which is popular with hundreds of Britons seeking winter sun.

The blast at a cafe-bakery in a residential area was the first suicide bomb in Israel since last April.

Police said it was likely that the bomber, identified as a 21-year-old Palestinian from Gaza, had intended to target a more crowded, tourist area.

He had probably blown himself up earlier than planned after his behaviour aroused the suspicions of passers-by.

Britons on holiday in the resort included Lorna Fitzsimons, Labour MP for Rochdale until 2005. Security at tourist hotels had been stepped up as police went on full alert, she said, adding: 'Nothing justifies terror on this scale,'

Benny Mazgini, 45, who was in an apartment across the street, said: 'I saw a man with a black coat and a bag. It is hot and it is strange to see someone with a coat.

'Seconds later, I heard a huge blast. It was awful - there was smoke, pieces of flesh all over the place.'

Rafi Caplin, of British-based Longwood Holidays, said the blast occurred in a part of town rarely visited by tourists.

'The general advice would be just to be vigilant, the same as when these types of incidents have happened elsewhere,' he said. Two Palestinian militant groups, Islamic Jihad and the Al Aqsa Martyrs' Brigades, claimed joint responsibility for the attack which they said had been planned for seven months.

They said the attack aimed to help end weeks of Palestinian infighting which has killed more than 60 people in the Gaza Strip. But four people were killed as fighting continued to rage there yesterday.

At the family home, his brother Naeem said: 'We knew he was going to carry out a martyrdom operation. His mother and father prayed for him to succeed.'

Since April, Israeli security forces have caught about a dozen Palestinians planning to carry out suicide attacks.
No comments: 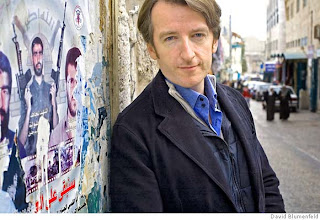 Bethlehem, West Bank -- A frail, balding man in late middle age shuffles through the shadows of Bethlehem, collecting evidence of murder and trying to protect his loved ones from violence and corruption as the Palestinian uprising rages all around and Israeli hit squads lurk in the background.

Meet Omar Yussef, fictional hero of "The Collaborator of Bethlehem," the first novel in a mystery series by British author Matt Beynon Rees. Yussef is a cross between Yasser Arafat and Miss Marple, a reluctant sleuth plunged into a murky West Bank world of swaggering gunmen, cowering priests and defiant refugees.

In the novel, crafted in the tradition of classic noir detective thrillers, the streets that Yussef treads are littered with the debris of suicide bombers and Israeli snipers. Each turn in the ancient souk, or marketplace, leads to another hooded gunman with a Kalashnikov.

Yussef is an aging history teacher at the U.N. girls school in the squalid Dheisheh refugee camp, but when a close friend and former pupil is accused of collaborating in the assassination of a militant chief, he feels compelled to confront the dark forces of Muslim-Christian conflict that threaten to tear Palestinian society apart.

Rees, 39, the Jerusalem bureau chief of Time magazine throughout the intifada, tells his story with the compelling authenticity of an award-winning reporter and a lean discipline gained from a lifelong immersion in classic detective fiction.

Rees was born in Wales and studied English literature at Oxford University. He arrived in Jerusalem in 1996 after postgraduate journalism studies at the University of Maryland and reporting stints at Forbes and the Bloomberg wire service in New York.

"The Collaborator of Bethlehem," which will be published in the United States in February by Soho Press, is more than a simple mystery story. It's an exploration of Palestinian life from the inside, wrapped in the conflicting layers of religious fanaticism that power the Middle East conflict. The result is an evocative, compassionate tale that transports the reader into the biblical landscape of the birthplace of Jesus. The sights, smells and tastes of Palestinian life are arrayed, from the rice and chicken ma'alouba that Yussef eats to break his Ramadan fast to the bitter qahweh sa'ada coffee he awaits in the mourning tent of the murder victims. Like the San Francisco of his literary hero Dashiell Hammett, Rees' Bethlehem is a major figure in the story, its ancient alleys and turbulent traditions adding an extra dimension to the modern tale of murder and intrigue.

"The first mystery I ever read was 'The Maltese Falcon,' " Rees says as he walks the streets of Bethlehem. "Hammett inspired me to take not just the character but the whole social context of the story. Having been a journalist here for the past 10 years, I don't have to wonder what Palestinians are like."

Rees' decadelong immersion in the mysteries of the Middle East has produced some memorable journalism, including a groundbreaking Newsweek cover story exposing Arafat's "Mafia state" and Rees' acclaimed first book, "Cain's Field: Faith, Fratricide and Fear in the Middle East," which explored the inner conflicts that haunt Israelis and Palestinians. But he says his novel explores the Palestinian experience more accurately than his news reporting.

"The Omar Yussef stories are all drawn from real things in Palestinian life, especially during the intifada, but writing them as fiction has been completely liberating," says Rees. "I can really get inside the head of a Palestinian. I'm not constricted by journalistic formulas."

He says the idea for the books came as he stood in a cabbage patch in a village on the outskirts of Bethlehem with the widow and parents of a militant who had been gunned down at that spot by an Israeli hit squad the night before.

"They were telling me what had happened, and I knew that this was going to end up as no more than one colorful paragraph at the top of my story. I wanted to try and find a vehicle to convey the emotional intensity, the reality for people living in this extreme situation," he says. "Working as a journalist, it was always extremely interesting to report, but I didn't always feel that the stories that emerged reflected how compelling the original material was. The structures and limitations of journalism were forcing me to leave out the facts which told me how Palestinians really lived and what they really thought. I was covering the peace process as though I was a sportswriter: Good or bad for the peace process today? I was missing out on a lot of things."

Rees decided to counter this by almost entirely excluding Israel from his novel. "Journalism takes Palestinian society and puts it in opposition to Israeli society, which makes everything look too simple," he says. "When you take Israel out of the equation, then you have a society that is very complex. The San Francisco of Dashiell Hammett is compelling decades later because it's not a perfect society infected by one bad guy who can be eliminated by the detective. Even when the mystery is solved, the ugliness is still out there and the hero must continue to face this complex reality.

Omar Yussef is already scheduled to appear in at least two more mysteries. The next one, set in Gaza, is already written. Rees has a three-book deal, with translations into French, Italian, Polish, Portuguese and Hebrew and the possibility of a movie version.

Rees said he prefers to think about Yussef's adventures as a labor of love and is sanguine about becoming a successful novelist. "When I was 7 years old, I wrote a poem at school about a tree and the teacher gave me a gold star," he says. "Now I've had three starred reviews for Omar Yussef. I'm right back where I started."