Which linked to this

We understand that Professor Stephen Hawking has declined his invitation to attend the Israeli Presidential Conference Facing Tomorrow 2013, due to take place in Jerusalem on 18-20 June. This is his independent decision to respect the boycott, based upon his knowledge of Palestine, and on the unanimous advice of his own academic contacts there.


So I contacted people I knew at BRICUP, who confirmed the story and gave me some background. Then I sent this email to Peres's spokesman:

From: Matthew Kalman Date: Tue, May 7, 2013 at 8:38 PMSubject: Stephen HawkingTo: yairz@president.gov.il
Yair:
There are reports that Stephen Hawking has cancelled his appearance at the President's Conference in June. Do you have any info?
Matthew

While waiting for his reply, I contacted two of the papers I regularly write for. They weren't interested in the story. Rather than waste the tip, which clearly would be a huge story by morning, I called Harriet Sherwood at The Guardian, who generously suggested I should report it for them. I confirmed the facts of the story, but no-one would talk on the record. Just before midnight, I tried Peres's spokesman again:


From: יאיר זיוון
Date: Wed, May 8, 2013 at 12:17 AMSubject: Re: URGENT: Stephen Hawking - Comment request for The GuardianTo: Matthew Kalman
I don't have any info on that now because its the presidents conference people who would deal with it but happy to get you an answer tomorrow.

Then came this response from Peres's spokesman:

The Peres people never did send me a comment. At 2.30AM on May 8, the Guardian story went live: 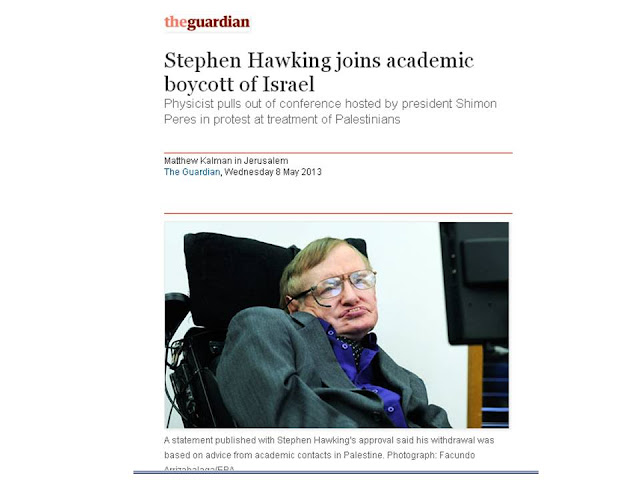 It became one of the most widely-read stories ever published on The Guardian website, with more than 50,000 Facebook shares by 3PM and more than 100,000 in total. 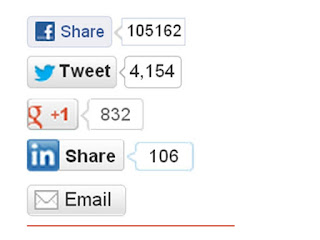 As the Guardian story went viral, I sought more information and reaction from Cambridge U and Peres's people in Jerusalem. I knew about Hawking's letter but still did not have permission to quote it.

Still nothing from Peres's office. Then, without warning, a new statement from Cambridge U spokesman Tim Holt - though he never sent it to me - suggesting my original story was wrong.


Had I been duped? I asked Holt for clarification.

That opened a floodgate of criticism and insults. Some people challenged my story firmly but politely:

Others descended into vitriol. It was amateur hour on the blogosphere:

The Guardian Got it Wrong: Stephen Hawking is NOT Boycotting Israel


Last night, May 8, the Guardian’s Harriet Sherwood ‘broke’ a story claiming that Stephen Hawking was joining the academic boycott of Israel, and that he was “pulling out of a conference hosted by Israeli president Shimon Peres in Jerusalem as a protest at Israel’s treatment of Palestinians.”


The report, based it seems on claims made by British Committee for the Universities of Palestine(BRICUP), was featured prominently on their website, and was followed up with a poll asking readers if they agreed with Hawking ”decision” to boycott Israel.
Here’s how the Guardian’s Israel page looks at the time of this post: There was just one problem.
The Guardian evidently didn’t check their facts, as information has been released strongly suggesting that the world-renowned theoretical physicist and former Professor at Cambridge pulled out of the Israeli academic conference purely for health reasons.The Commentator reported the following:
…a Cambridge university spokesperson has confirmed to The Commentator that there was a “misunderstanding” this past weekend, and that Prof. Hawking had pulled out of the conference for medical reasons. A University spokesman said: “Professor Hawking will not be attending the conference in Israel in June for health reasons – his doctors have advised against him flying.”
Further, a spokesman for Cambridge University sent the following email to a CiF Watch reader in response to an inquiry: The only questions which seems to remain is how long it will take for the Guardian to issue a mea culpa on their faux scoop.


But soon I had the text of Hawking's boycott letter. I called Tim Holt in Cambridge to demand an explanation. Still no comment. Then this arrived:

Over the phone, Holt admitted the "health" statement was wrong and apologized.


TIM HOLT: “You were right. Stephen did send a letter on Friday to the Israeli Presidential office saying that he would respect the boycott. Your sources were correct and you have my apologies. I was misinformed.”

I asked Holt to issue a revised statement, began drafting my update for the Guardian and Tweeted the about-turn:


In case you doubted my story on #Hawking's #boycott of #Israel, I have now confirmed it again. Cambridge retraction soon @guardian #BDS
— Matthew Kalman (@MatthewKalman) May 8, 2013

Crispian Balmer, Jerusalem Bureau Chief for Reuters, wasn't the only one who found it hard to believe the flip-flopping from Cambridge U.

@matthewkalman @guardian I am now officially confused. Does this mean Cambridge is now retracting the retraction?
— crispian balmer (@crispiandjb) May 8, 2013

My buddy @matthewkalman claims that he wasn't lying about Hawking. Yeah, we'll see about that. @guardian
— ThisIsPalestine (@ThisIsPalestine) May 8, 2013


@matthewkalman Er, because Maimon was responding to unconfirmed reports whereas the Cambs statement was supposed to be a clarification. Duh?
— Raheem Kassam (@RaheemJKassam) May 8, 2013


@matthewkalman not proof. Not by a long shot. U need to prove u didn't report the Bricup statement as fact. Will look out for it.
— MichaelDickson (@michaeldickson) May 8, 2013


From a guy who wrote a book called "The Murder of Yasser Arafat," this is hardly convincing twitter.com/MatthewKalman/…
— Armin Rosen (@ArminRosen) May 8, 2013


@matthewkalman Um, maybe because he was dumb enough to actually believe you when you spewed your bullshit?
— ThisIsPalestine (@ThisIsPalestine) May 8, 2013


@matthewkalman Y would we doubt? @guardian has a track record of lies. U printed w/out verification based on BDS claims. Surprised? I'm not!
— Ploni Almoni (@Saratonen) May 8, 2013


War on correct version of Hawking story between @thecommentator and @reuters on one side,@guardian and @matthewkalman on the other. FIGHT
— Benjamin of Tudela (@BenjaminTudela) May 8, 2013

Finally, close to 6PM, Holt issued the retraction from Cambridge U. It wasn't exactly what he'd said to me by phone, but it was good enough to vindicate our version of the story as 100% accurate:

Even my most vociferous critics had to eat their words, from this: 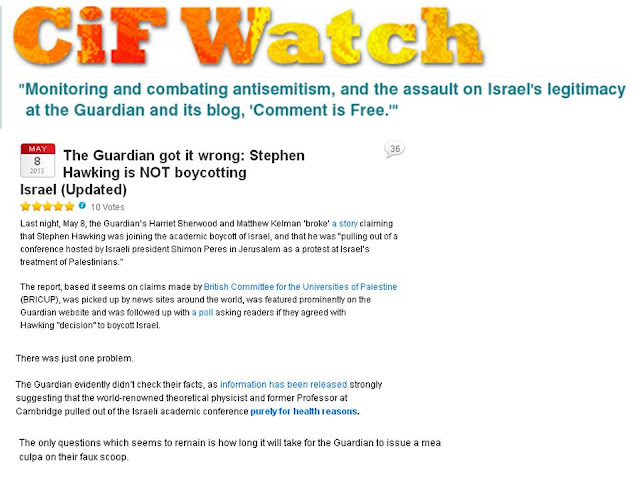 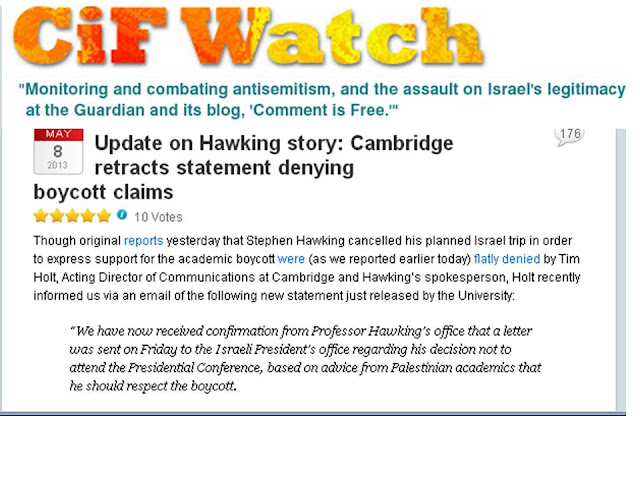 But reactions were still mixed:


@matthewkalman Kudos on great journalism, after what must have been a very tough day for you!
— Daniel Seidemann (@DanielSeidemann) May 8, 2013


@matthewkalman Congrats on being vindicated. Any idea why there was such a mess? Was Hawking trying to back out?
— Benjamin of Tudela (@BenjaminTudela) May 8, 2013


Everyone who was lecturing me this AM for tweeting The Guardian story on Hawking now looks even more foolish - networkedblogs.com/L1Lbb
— Hussein Ibish (@Ibishblog) May 8, 2013


I decided to write a quick blog for the Open Zion section of The Daily Beast chronicling the twists and turns of the previous 24 hours.


The man behind the Stephen Hawking story -- @matthewkalman -- tells how it came about thedailybeast.com/articles/2013/…
— Zaid Jilani (@ZaidJilani) May 8, 2013

This @matthewkalman piece on the tick-tock of the Stephen Hawking Israel boycott news, is amazing: thebea.st/ZIalOC via @open_zion
— Ali Gharib (@Ali_Gharib) May 8, 2013


Some people responded as if they knew and hated me personally:


GaborFränkl3 days agoThe problem is that this otherwise utterly failed and discredited far-left radical extremist so-called reporter has been working for a number of publications and papers in the past few years alone, some of them as a freelancer. Independent, Guardian, Christian Science Monitor whatnot, the whole discredited bunch with zero press ethics. Clearly this odious self-hater couldn’t be happier reporting his fellow antisemites’ abominations as he is jumping up and down in his glee as it turns out from the closing para. in his Daily Beast piece, spouting inane BS about this supposedly decent and pure as white simpleton, primitive dupe of Islamists [Hawking]. I say to him - M.K. - let there be no bigger joy and happiness in his whole life. The ultimate chutzpah is framing deviously and maliciously his closing lines over at the DB as he did. One disgusting stomach-turning individual M. Kalman is, for sure


And some people, apparently, still didn't get it:


@matthewkalman tells how he got the Hawking "Israel boycott" story completely wrong -- but where is his apology? flip.it/UmCfR v…
— Nicholas Wapshott (@NWapshott) May 9, 2013

MORE ON THIS STORY: