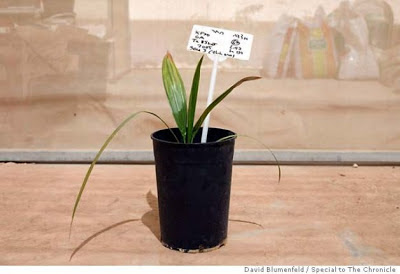 The ancient Hebrews called the date palm the tree of life. "Methuselah," shown here, was planted Jan. 25; the seed was discovered during an excavation of Herod's palace. Photo by David Blumenfeld, special to the Chronicle

Kibbutz Ketura, Israel -- It has five leaves, stands 14 inches high and is nicknamed Methuselah. It looks like an ordinary date palm seedling, but for UCLA- educated botanist Elaine Solowey, it is a piece of history brought back to life.

Planted on Jan. 25, the seedling growing in the black pot in Solowey's nursery on this kibbutz in Israel's Arava desert is 2,000 years old -- more than twice as old as the 900-year-old biblical character who lent his name to the young tree. It is the oldest seed ever known to produce a viable young tree.

The seed that produced Methuselah was discovered during archaeological excavations at King Herod's palace on Mount Masada, near the Dead Sea. Its age has been confirmed by carbon dating. Scientists hope that the unique seedling will eventually yield vital clues to the medicinal properties of the fruit of the Judean date tree, which was long thought to be extinct.

Solowey, originally from San Joaquin (Fresno County), teaches at the Arava Institute for Environmental Studies at Kibbutz Ketura, where she has nurtured more than 100 rare or near-extinct species back to life as part of a 10-year project to study plants and herbs used as ancient cures.

In collaboration with the Louis L. Borick Natural Medicine Center at Hadassah Hospital in Jerusalem, named in honor of its Southern California- based benefactor, Solowey grows plants and herbs used in Tibetan, Chinese and biblical medicine, as well as traditional folk remedies from other cultures to see whether their effectiveness can be scientifically proved.

In experiments praised by the Dalai Lama, for example, Borick Center Director Sarah Sallon has shown that ancient Tibetan cures for cardiovascular disease really do work.

The San Francisco Chronicle was granted the first viewing of the historic seedling, which sprouted about four weeks after planting. It has grown six leaves, but one has been removed for DNA testing so scientists can learn more about its relationship to its modern-day cousins.

The Judean date is chronicled in the Bible, Quran and ancient literature for its diverse powers -- from an aphrodisiac to a contraceptive -- and as a cure for a wide range of diseases including cancer, malaria and toothache.

For Christians, the palm is a symbol of peace associated with the entry of Jesus into Jerusalem. The ancient Hebrews called the date palm the "tree of life" because of the protein in its fruit and the shade given by its long leafy branches. The Arabs said there were as many uses for the date palm as there were days in the year.

Greek architects modeled their Ionic columns on the tree's tall, thin trunk and curling, bushy top. The Romans called it Phoenix dactylifera -- "the date-bearing phoenix" -- because it never died and appeared to be reborn in the desert where all other plant life perished.

Now Solowey and her colleagues have brought this phoenix of the desert back to life after 2,000 years. 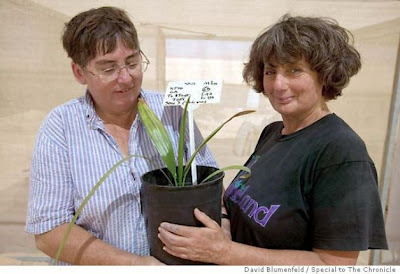 Researchers Elaine Solowey (left) and Sarah Sallon show off seedling, whose DNA is being studied. Photo by David Blumenfeld, special to the Chronicle

The ancient seeds were found 30 years ago during archeological excavations on Mount Masada, the mountaintop fortress on the shore of the Dead Sea where King Herod built a spectacular palace. When the Romans conquered Palestine and laid waste to the Temple in Jerusalem, Masada was the last stand of a small band of Jewish rebels who held out against three Roman legions for several years before committing mass suicide in A.D. 73.

Archaeologist Ehud Netzer found the seeds, which were identified by the department of botanical archaeology at Israel's Bar-Ilan University. Then they were placed in storage, where they lay for 30 years until Sallon heard about the cache.

"When we asked if we could try and grow some of them, they said, 'You're mad,' but they gave us three seeds," she said.

Sallon took the seeds to Solowey, who has cultivated more than 3,000 date palms and rarities like the trees that produce the fragrant resins frankincense and myrrh. Solowey admits she was skeptical about the chances of success with this project.

"When I received the seeds from Sarah, I thought the chances of this experiment succeeding were less than zero," said Solowey, cradling the precious seedling in a specially quarantined section of her nursery on the kibbutz. "But Dr. Sallon insisted and I took this very seriously. Lotus seeds over 1,000 years old have been sprouted, and I realized that no one had done any similar work with dates, so why not give it our best shot -- and we were rewarded."

The three seeds were long and thin, grayish-brown in color. Solowey soaked them in warm water, and then added gibberellic acid, a potent growth hormone used to induce germination in reluctant seeds. Next, she added a special rooting hormone for woody plants called T8 and an enzyme-rich fertilizer to supplement the natural food inside it. She then planted it in sterile potting soil on the Jewish festival of trees, which this year fell on Jan. 25.

Solowey placed the pots in her nursery and tended to them each day for a month, not expecting anything to happen.

"Much to my astonishment, after five weeks, a small little date shoot came up," she says. "It was pale, almost whitish green. The first two leaves were abnormal-looking. They were very flat and very pale. The third leaf started to have the striations of a normal date plant. Now it looks perfectly normal to me.

"The only difference between this date seedling and any other date seedlings I've seen come up is the length of the third leaf. This is very unusual," she said, pointing out one very long, thin leaf growing out of the pot.

"It's certainly the oldest tree seed that's ever been sprouted. Wheat seeds from pharaohs' tombs have been sprouted, but none of the plants have survived for very long. Before this, the oldest seed grown was a lotus from China, which was 1,200 years old," she said. "I'm very excited. I wasn't expecting anything to happen. I'm really interested in finding out what the DNA testing is going to show. I know that date seeds can stay alive for several decades. To find out that they can stay alive for millennia is astonishing."

Date palms are either male or female, but it's too early to tell the sex of Methuselah. Normally, female trees begin to bear fruit after about five years.

"We have to figure out where we can put it so it can grow to maturity. Then we'll hope that it grows up and flowers so we can figure out whether it's male or female, and then it has offshoots and seeds so we can propagate it. It's very exciting to think that maybe someday we can eat 2,000-year-old dates, but there's a 50 percent chance that it's a male, in which case that won't happen," she said.

Sallon trained as a pediatrician and gastroenterologist, and she once worked with Mother Teresa at the Sisters of Charity orphanage in Calcutta. She founded the Louis L. Borick Natural Medicine Center 10 years ago and is a world-renowned expert on the medical properties of plants. "It feels remarkable to see this seed growing, to see it coming out of the soil after 2, 000 years. It's a very moving and exciting moment," she said.

The two researchers hope the reborn tree will provide valuable information about the Judean economy and society at the time of Jesus.

Once the seed sprouted, samples of seeds excavated from the same cache on Masada were sent to the University of Zurich for radio-carbon dating. The results came back last week, showing the samples were 2,000 years old, plus or minus a margin of error of 50 years, placing them during or just before the Masada revolt.

"Perhaps one of our ancestors was sitting there on the battlements of Masada eating his dates while the Roman armies were preparing for the final siege and perhaps nonchalantly spitting out a pip," said Sallon. "Two thousand years later, here I am at Kibbutz Ketura and it's grown."

The sixth leaf has been sent to the Volcani Centre, Israel's agricultural research institute, for DNA testing by date palm expert Yuval Cohen.

"I find it remarkable," said Cohen. "Two thousand years ago, during the Roman Empire, Israel was known for the quality of its dates. They were famous throughout the Roman Empire. But date growing as a commercial fruit export stopped at the end of 70 A.D., when the Second Temple was destroyed by the Romans. From then, the tradition was lost.

When the Romans invaded ancient Judea, thick forests of date palms towering up to 80 feet high and 7 miles wide covered the Jordan River valley from the Sea of Galilee in the north to the shores of the Dead Sea in the south. The tree so defined the local economy that Emperor Vespasian celebrated the conquest by minting the "Judea Capta," a special bronze coin that showed the Jewish state as a weeping woman beneath a date palm.

Today, nothing remains of those mighty forests. The date palms in modern Israel were imported, mainly from California. The ancient Judean date, renowned for its succulence and famed for its many medicinal properties, had been lost to history.