My world scoop on the Hawking boycott - original published version 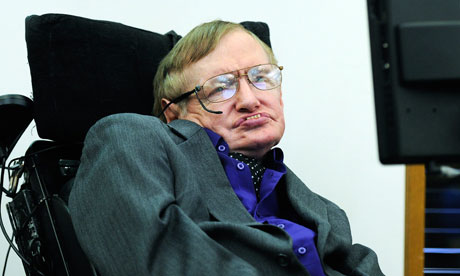 A statement published with Stephen Hawking's approval said his withdrawal was based on advice from academic contacts in Palestine. Photograph: Facundo Arrizabalaga/EPA
Professor Stephen Hawking is backing the academic boycott of Israel by pulling out of a conference hosted by Israeli president Shimon Peres in Jerusalem as a protest at Israel's treatment of Palestinians.
Hawking, 71, the world-renowned theoretical physicist and Lucasian Professor of Mathematics at the University of Cambridge, had accepted an invitation to headline the fifth annual president's conference, Facing Tomorrow, in June, which features major international personalities, attracts thousands of participants and this year will celebrate Peres's 90th birthday.
Hawking is in very poor health, but last week he wrote a brief letter to the Israeli president to say he had changed his mind. He has not announced his decision publicly, but a statement published by the British Committee for the Universities of Palestine with Hawking's approval described it as "his independent decision to respect the boycott, based upon his knowledge of Palestine, and on the unanimous advice of his own academic contacts there".
Hawking's decision marks another victory in the campaign for boycott, divestment and sanctions targeting Israeli academic institutions.
In April the Teachers' Union of Ireland became the first lecturers' association in Europe to call for an academic boycott of Israel, and in the United States members of the Association for Asian American Studies voted to support a boycott, the first national academic group to do so.
In the four weeks since Hawking's participation in the Jerusalem event was announced, he has been bombarded with messages from Britain and abroad as part of an intense campaign by boycott supporters trying to persuade him to change his mind. In the end, Hawking told friends, he decided to follow the advice of Palestinian colleagues who unanimously agreed that he should not attend.
By participating in the boycott, Hawking joins a small but growing list of British personalities who have turned down invitations to visit Israel, including Elvis Costello, Roger Waters, Brian Eno, Annie Lennox and Mike Leigh.
However, many artists, writers and academics have defied and even denounced the boycott, calling it ineffective and selective. Ian McEwan, who was awarded the Jerusalem Prize in 2011, responded to critics by saying: "If I only went to countries that I approve of, I probably would never get out of bed … It's not great if everyone stops talking."
Hawking has visited Israel four times in the past. Most recently, in 2006, he delivered public lectures at Israeli and Palestinian universities as the guest of the British embassy in Tel Aviv. At the time, he said he was "looking forward to coming out to Israel and the Palestinian territories and excited about meeting both Israeli and Palestinian scientists".
Since then, his attitude to Israel appears to have hardened. In 2009, Hawking denounced Israel's three-week attack on Gaza, telling Riz Khan on Al-Jazeera that Israel's response to rocket fire from Gaza was "plain out of proportion … The situation is like that of South Africa before 1990 and cannot continue."
The office of President Peres, which has not yet announced Hawking's withdrawal, did not respond to requests for comment. Hawking's name has been removed from the speakers listed on the official website.

MORE ON THIS STORY: